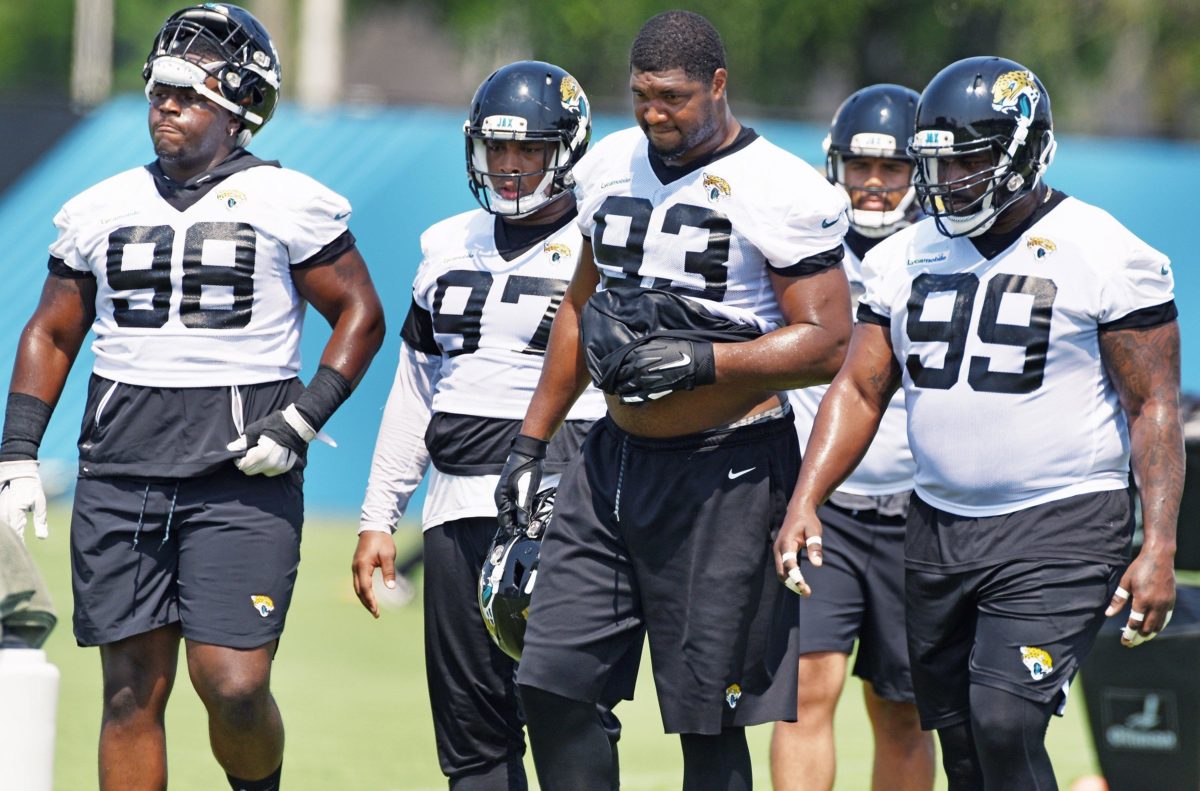 At 32, Jaguars defensive end Calais Campbell is still a force.

He’s shown no signs of slowing down but is defying Father Time instead.

In his 12th season and coming off back-to-back Pro Bowl appearances, Campbell still gets after quarterbacks, overpowers offensive linemen and remains one of the Jaguars’ best-conditioned players.

Though he is the Jaguars’ second-oldest player (turning 33 on Sept. 1), he has his sights set on making an even bigger impact this season after leading the team with 10.5 sacks in 2018.

It was business as usual on Friday’s Day 2 of training camp. Campbell was the first in line among the team’s defensive line going through drills and applied effective pass rush pressure throughout the team’s work.

Since his arrival in Jacksonville as a free agent in 2017, Campbell has totaled 25 sacks, which included a franchise record of 14 1/2 in 2017. He is the first player in team history to notch consecutive seasons of double-digit sacks.

″Obviously, he can affect the quarterback,″ defensive coordinator Todd Wash said. ″He’s the prime example of what you want out of a six or a big end in our system. I’m glad we have him.”

Despite his presence, the Jaguars are making sure they don’t overwork him or any other of the key players during training camp with a critical regular season ahead after going 5-11 in 2018.

Unlike last season or in 2017, coach Doug Marrone has changed up his daily training camp schedule to make it less rigid on the players for the first 10 days.

″We’re going to take it in a progression and build up to a level where we can go,″ Marrone said. ″From all the stuff that we’ve got, these first 10 days have been a high level of soft tissue injuries, things of that nature. So, we’re going to be very — I guess it’s player safety. I don’t want to use the word cautious or anything like that because we’re going to go, so and that’s where we are.″

During 11-on-11 work Friday, Campbell received only limited snaps. He said the training camp regimen change after the first two days has been noticeable, admitting it’s not something he prefers. But he understands the reasoning behind it.

″It’s tough because I like to be the hardest-working person on the field,″ Campbell said. ″That’s kind of been my M.O. the majority of my career, and so when you know you’re taking reps off and you’re not getting as much, you’re not the hardest-working person on the field at all. So it’s a balance. But I also know that you only get so much tread on your tires and so I have to be smart and take advantage of allowing my body to adjust slowly.

″I can’t just go out here and act like I’m 25 again, you know? But it’s a balance, so I got to push myself and work as hard as I can, but also take care of my body as much as I can, too. The coaching staff, we sit down, we talked about — or put together a good quality plan and well see how it goes, just take it one day at a time, and I’m making sure I’m trying to be the best I can be.″

Campbell, who played for the Arizona Cardinals for his first nine seasons in the league, has not missed a game in four years. In the past six seasons, he’s only missed two games, which came during the 2014 season with the Cardinals.
However, Campbell said he played though several minor injuries in 2018 and didn’t feel pain free until a couple of months after the season ended.

But he’s shown no signs of trouble so far. The Jaguars need him to remain playing at high level, especially with the uncertainty of defensive end Yannick Ngakoue, who is staging a holdout from training camp to get a new contract.

″There are no ifs, ands or buts about it, ‘Yann’ loves the game of football, and when he gets back, he is going to be on point, ready to go,″ Campbell said. ″I know he’s itching to get back. He can’t wait. I know it tears him up not to be here with us working. He’s a guy that we all know that he’s working somewhere.”