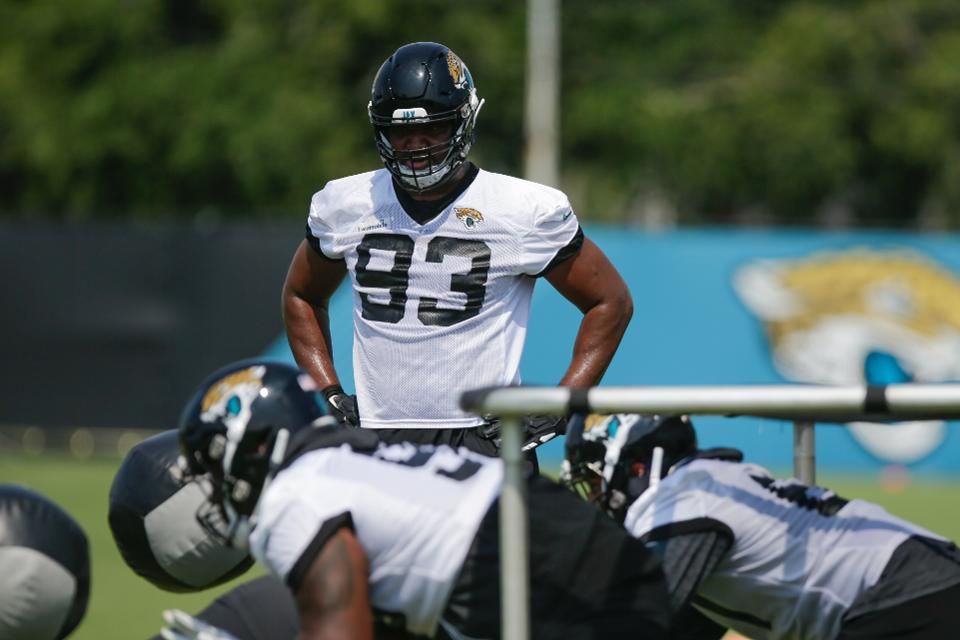 Jaguars’ defensive lineman Calais Campbell is entering his 12thseason in the National Football League and he credits his teammates for helping him get to this point.

“The biggest thing for me is I like being around the guys. I like being in the locker room. I like talking to the coaches. This is where, for me, I really try and get to know my teammates,” Campbell told reporters during Week 3 of Organized Team Activities in Jacksonville FL. “By the time the season starts and everything is flying different ways, you can only get so much better. Right now, you get to work on the small things, go back to the basics, to really work on the small details of the game. When you get to the season, so much of it is scheme and what they are trying to do. You don’t really get to the basics, so it’s nice to be out here working on the basics over and over again and really be able to help the young guys as well.”

In February, the Jaguars exercised Campbell’s three million dollar option bonus for 2019 according to Spotrac.com. He is entering the third year of his four-year $60 million deal also per Spotrac.com.

Campbell works hard. He shows up and leads by example. The younger Jaguars players turn to him and his experience as an example of how they can get better. The team captain relishes the role of teaching and grooming the younger players into professionals.

“That’s probably the best part of why I like coming here, you get to kind of give them [some coaching]. I definitely don’t want to be a coach when I’m done playing,” Campbell admitted. “I love the game of football, but they work way too hard and spend way too much time in here.”

Campbell, who stands 6-8 and weighs 300 pounds, is a force on the football field. The three-time Pro-Bowler has been spending time before practice with third-year defensive tackle Eli Ankou and second-year defensive lineman Taven Bryan in order to help them get better just as he used to pick the brain of experienced linebacker when he was younger.

“I probably should try and get more guys to come out and do stuff, but for me, I’m just trying to work on stuff myself and kind of get a feel for different things. Their lockers are next to mine, so it’s a little easier to get them to come out and work on some stuff,” Campbell explained. “The whole practice I was talking to guys and working on different stuff. At the end of the day, we are professionals. We just work on different things and different mindsets, understanding why I’m doing something a little better … DeMarcus Ware, I picked his brain for a solid hour, just talking ball and just seeing that level of understanding. That was pretty cool.”

The Jaguars organization made an effort this offseason to make some changes and bring in players that have experience and can add leadership. So far, Campbell is pleased with the makeover.

“Obviously, Nick Foles has done an incredible job of being a leader. He just has a real confident voice in the locker room and that is contagious. When your quarterback is confident like that and can really speak and inspire guys, it just rubs off on everyone else,” Campbell explained. “We are out here competing and trying to get better each and every day. A lot of new guys are showing up and earning the respect of guys who been here. That is a good feeling when guys can come in and pay their dues and earn their respect from the guys.”

Campbell added he likes the vibe of this 2019 team and he likes how everyone is working and getting better every day.

When asked about the possible return of linebacker Telvin Smith Sr., Campbell told reporters he has talked to him and he’s holding out hope that he could return to the team this season.

“I know he loves the game,” Campbell added. “He makes us better so I’d love to have him.”

In the meantime, Campbell will focus on preparing himself and lending a hand to his younger teammates in preparation for the upcoming season.