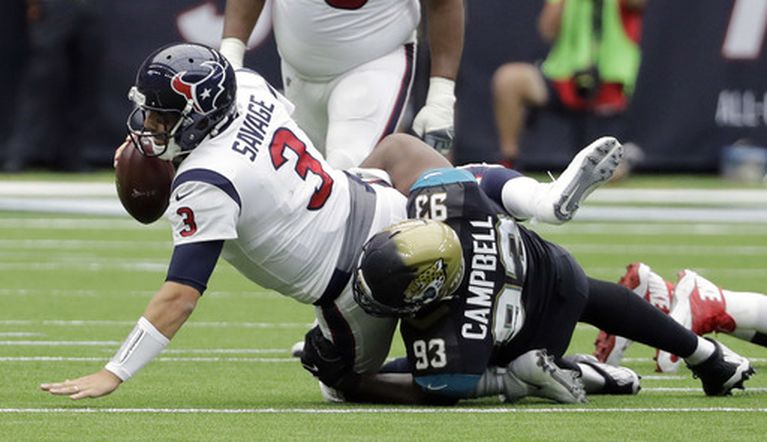 JACKSONVILLE, Fla. (AP) — Calais Campbell has two things he wants to bring back from Arizona: An eighth victory and Larry Fitzgerald’s No. 11 jersey.

“I get it’s a story line, but for me, you have to make it just another game and make it about just getting a ‘W,’” Campbell said Tuesday. “I have friends there. I spent a lot of time there. There’s a lot of history. But at the end of the day, you’ve got to live in the moment.

“Right now, we’re a really good team trying to take that next step and set ourselves up to win our division. We have a one-game lead, but that can evaporate just like that. I’m not really worried about anything else than just staying focused and making sure this team is on par reaching our full potential and going where we can go.”

No one should be surprised that Campbell wants to shift the spotlight.

After all, the 6-foot-8, 300-pounder is a consummate pro and one of the reasons the Jaguars are atop the AFC South after 10 games since 2010.

“He put a lot of blood, sweat and tears in that city, so I understand it’s going to be emotional for him,” safety Tashaun Gipson said. “And we want to do this for him for sure.”

Campbell has NFL-leading and career-high 11 sacks, setting the tone for the league’s No. 1 defense , and has been a positive influence on fellow defensive ends Yannick Ngakoue (nine sacks) and Dante Fowler Jr. (6 sacks).

His deep, raspy, voice provides a calming influence in the locker room and a distinctive sound in the huddle.

“This is a genuine guy that wants to help and wants to be a great teammate and has an unbelievably powerful, positive presence. It’s been awesome.”

Campbell had a similar effect in Arizona. He 373 tackles, 56 sacks, 42 pass breakups, 11 forced fumbles and three interceptions with the Cardinals, who chose to sign pass-rusher Chandler Jones to a long-term deal instead of trying to keep Campbell.

The Jaguars gave Campbell a four-year contract worth $60 million in March. The deal included $30 million guaranteed.

Campbell saw Jacksonville’s potential to be a dominant defense and even referenced winning the Super Bowl long before he played a game for the floundering franchise.

He made the big game as a rookie to cap the 2008 season — a 27-23 loss to Pittsburgh — and said Tuesday he thinks about coming up short “all the time.”

“I love the game of football and the ultimate goal is to win the Super Bowl and to get real close and not get there, it’s hard,” he said. “I thought I’d get back before now, but 10 years later I feel like this team we have has a real good opportunity.

“If we can stay focused and continue to get better and limit our mistakes, we have a real good chance. I’m just trying to make sure I do everything in my power so that we don’t miss an opportunity again.”

There’s one opportunity he doesn’t want to miss Sunday, and that’s getting Fitzgerald’s jersey.

“I hope he will let me trade him jerseys,” Campbell said. “I’ve always wanted a jersey from him, so I never asked him for one before, so this would be kind of cool. Hopefully he’ll let me have that one.”