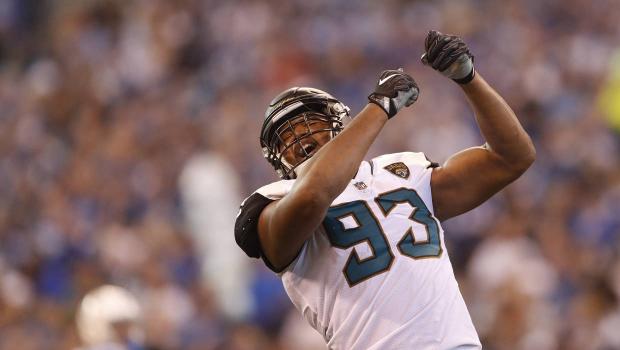 Despite enjoying nine successful seasons with the Arizona Cardinals, who drafted him in the second round in 2008, Campbell said bluntly on Tuesday that it’s just another game.

“I get that it’s a story line, but for me, you have to make it just another game,’’ Campbell said. “You have to make it just about getting a`W’. I have friends there, I spent a lot of time there, a lot of history. But you’ve got to live in the moment. Right now, we’re a real good team trying to take that next step and set ourselves up to win a division.’’

Yet, Campbell, 31, says he looks forward to seeing some of his former teammates, especially wide receiver Larry Fitzgerald.

“It will be fun to connect with those guys,” Campbell said. “Larry is always one of those guys and I hope he let me trade jerseys. I’ve always wanted a jersey from him. I’ve never asked him for one before, so this will be kind of cool.”

Perhaps, no free agent has made a bigger splash this season than what Campbell has done so far in Jacksonville. He is tied for the NFL lead in sacks with Dallas’ DeMarcus Lawrence with 11.5.

Behind Campbell’s presence, the Jaguars are allowing just 276.6 total yards and yielding 14.1 points per game. Both rank first in the league.

At 6-feet-8, 300 pounds, Campbell has been strong enough to bull-rush through blocks for sacks and tackles. Campbell, who has not missed a game this season, has made 39 tackles, which is the fifth-highest on the team.

“ I think Calais, he’s gone above and beyond at least what I thought he was going to be coming in here,’’ coach Doug Marrone said. “More importantly, the production that we’ve had out of him, he’s playing a lot of plays for us and he’s been outstanding.’’

“You can see from a professional standpoint that he’s a true pro and you just look at him and the way he approaches the game and he goes out there and translate it,” safety Tashaun Gipson said.

“He’s not a guy that talks the talks, but he walks the walk and you [have] nothing to do but respect him. For me, personally, a lot of guys rallied behind me after last week. I probably said some things that Calais probably wouldn’t say. But I understand how personal it is for him. Just like those guys rallied behind me, we’re going to rally behind to get him that win that he deserves.”

Last week before playing the Browns, Gipson boasted that Jaguars were going to shut out his former team and that Cleveland would probably go 0-16 for the season. The Jaguars didn’t achieve a shutout but they pulled out a 19-7 victory under rain and snowy conditions to improve to 7-3 and take sole possession of first place in the AFC South. It is the first time they are leading their division entering Week 12 since 1999.

Campbell said he doesn’t have any ill feelings toward the Cardinals, although they did not make a strong push to re-sign him. Instead, the Cardinals decided to lock up linebacker Chandler Jones, who signed five-year, $83 million contract in March after deciding to couldn’t afford to keep both players.

Campbell achieved seven or more sacks during three of his final four seasons with the Cardinals.

“That was very tough at the time,” Campbell said. “But at the end of the day, things happened the way it happened. Coach (Bruce) Arians is a great coach, a great motivator. He taught me a lot and I had fun playing for him. He left a good impact on me. But I look at the moment, once you move on, you move on. This game is not about me, or individual person, it’s a team game.”