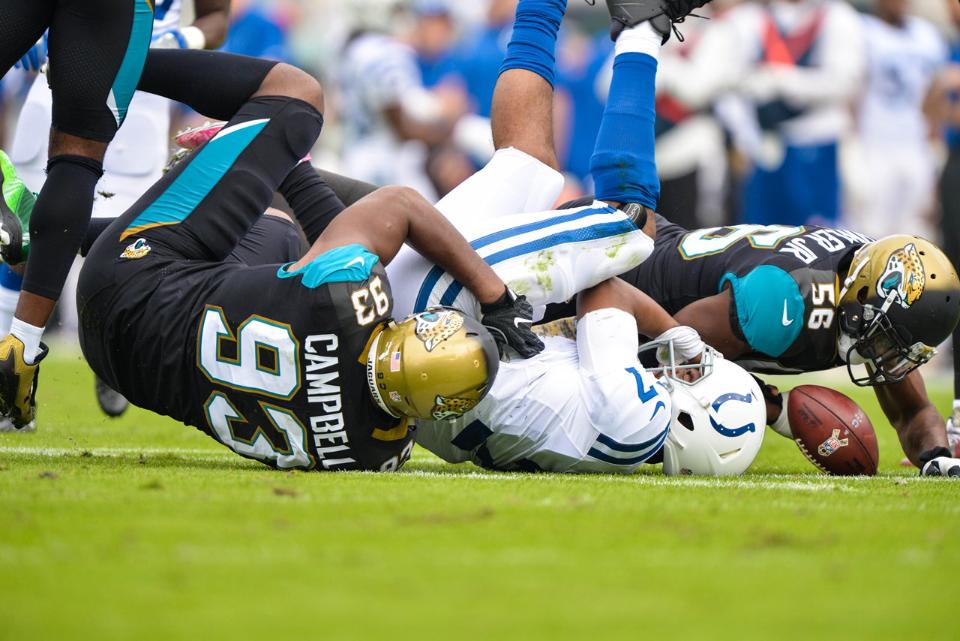 JACKSONVILLE, Fla. — Calais Campbell has repeated it after every loss the Jacksonville Jaguars have suffered this season.

Boy, have his teammates listened. The Jaguars have responded with big victories after each of their four losses, including last Sunday’s 30-10 rout of the Indianapolis Colts at EverBank Field. That ability to rebound from a loss is just as responsible for the team battling for first place in the AFC South as their top-ranked defense.

“I think a big part of that is the culture that Doug has kind of created here,” Bortles said. “That, and some of the guys we’ve brought in, Calais and some of these guys that have been outspoken leaders.

“You don’t have the mindset of, ‘Here we go again.’ It’s kind of, ‘That wasn’t who we are. That’s not how we play football. Let’s forget about it, make the corrections, move on and get back to doing what we do best.'”

Not only have the Jaguars (8-4) followed each loss with a victory, they’re winning those bounce-back games in routs — an average of 26.3 points.

After losing to Tennessee 37-16, the Jaguars routed Baltimore 44-7 in London. They followed a 23-20 overtime loss to the New York Jets with a 30-9 blowout of host Pittsburgh in which they intercepted Steelers quarterback Ben Roethlisberger five times.

After a 27-17 loss to the Los Angeles Rams the Jaguars shut out Indianapolis 27-0 at Lucas Oil Stadium. Last Sunday’s rout of the Colts followed a 27-24 loss at Arizona.

Having good players helps. So does leading the NFL in pass defense and sacks and ranking in the top three in turnovers forced and interceptions.

But it’s also due to the players being able to analyze what went wrong and not repeat those mistakes. Things don’t snowball out of control any longer.

“Sometimes you think about it as a coach and you come back and you talk about focus and having a good practice and getting yourselves ready,” Marrone said. “I think in order to be able to do that you’ve got to kind of shake it off quickly. I think if you let it linger for a long period of time then you never really start working ahead to the upcoming game. I think our players have been able to do a good job of realizing what’s gone wrong in the game, coming in here, being accountable, making those corrections, and then let’s get ourselves started and let’s get back on a winning track.”