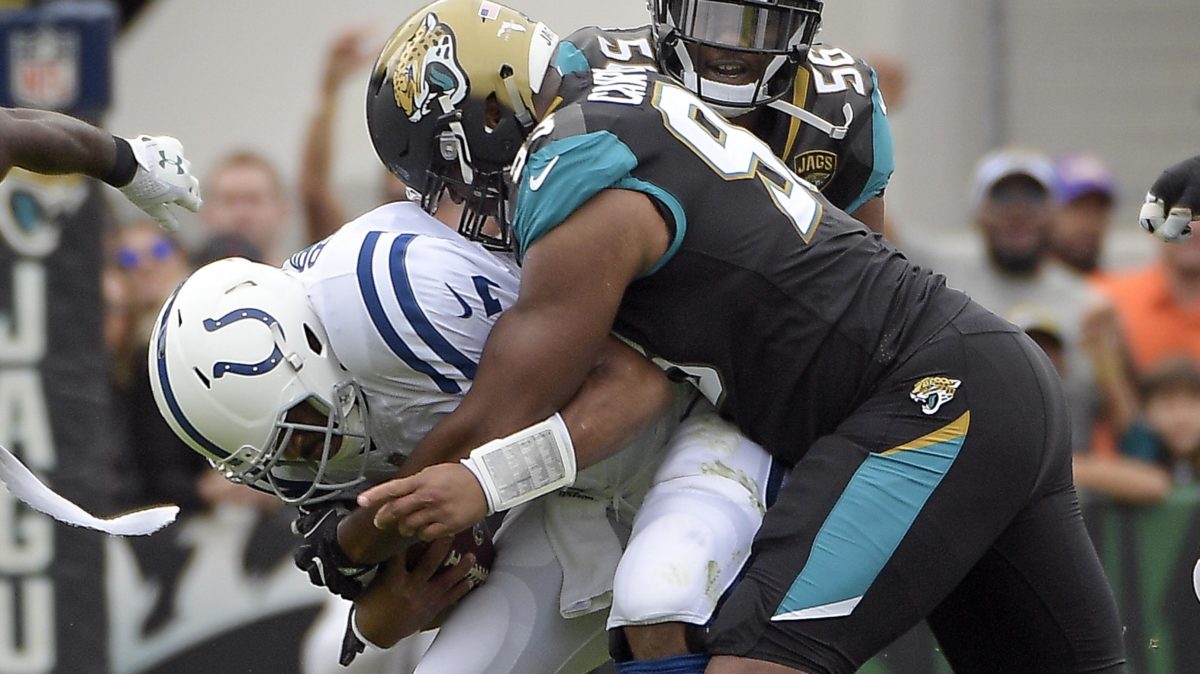 Malik Jackson had his hands on Indianapolis quarterback Jacoby Brissett and couldn’t quite get him to the ground.

Yannick Ngakoue also had an opportunity in the backfield and barely missed his chance to register a sack.

But there was no stopping Calais Campbell.

Continuing what has been a dominant first season with the Jaguars, Campbell set the franchise single-season sack record (12 1/2) when he wrangled Brissett to the turf for a loss of 10 yards late in the first quarter of a 30-10 victory Sunday at EverBank Field.

The sack moved Campbell past Tony Brackens, who set the previous franchise mark of 12 sacks during the 1999 season.

“It’s awesome to watch,” Jackson said of Campbell, the 6-foot-8, 300-pound game-changer who often lines up next to him. “I’m upset it took him so long. He’s been working so hard. Just to be a part of that and see it for myself in person, it’s a blessing.”

A blessing that has been felt again and again.

Campbell, who signed a four-year, $60 million contract in March, became a fan favorite before he played his first home game with the Jaguars.

He became the first player in team history to record four sacks in a game during a season-opening win at Houston and has hardly slowed since then.

Counting Sunday, Campbell has at least one-half sack in nine of the team’s 12 games.

Largely because of his efforts, the Jaguars climbed to a league-leading 45 sacks after recording four against the Colts.

“I know individually his name is going to go on [the sack record], but you can’t get those things if the guys in the back end aren’t covering,” Jaguars coach Doug Marrone said. “They did an outstanding job there.”

Campbell’s record-setting day was part of an all-around improved performance from a Jaguars defense that looked rather ordinary during a loss at Arizona last week.

Defensive coordinator Todd Wash challenged his unit to play with greater intensity against the Colts, and the response was obvious.

Brissett was a pedestrian 21-of-36 passing for 174 yards with one touchdown and two interceptions. The turnovers came on a sliding play by cornerback Jalen Ramsey late in the second quarter and on a good read by free safety Tashaun Gipson in the fourth.

The Jaguars outgained the Colts 426-290 and held them to 5-of-15 on third down, an effort that was much closer to their elevated expectations.

“Last week, we would be the first ones to say that we didn’t play to our standard of football,” Gipson said. “That was the biggest thing. When you look at that tape, it just didn’t look right. We definitely were challenged this week to come out and put on a dominant performance.”

That’s pretty much what Campbell has been doing all season.

Shortly after the sack, Campbell was flashed on the videoboards and received an ovation from the home crowd while his achievement was acknowledged.

Could he come close to 20 sacks on the season? How high could he one day move up on the Jaguars’ career sack list?

Those were questions for another day as Campbell remained locked in on the season’s final stretch.

“It’s what I thought it could be, but we’ve still got a lot of room for improvement. We could be a lot better. Today was not our best ball,” said Campbell, who totaled four tackles and three quarterback hits Sunday. “At the end of the day, when you get a W without playing your best ball, that’s huge.”