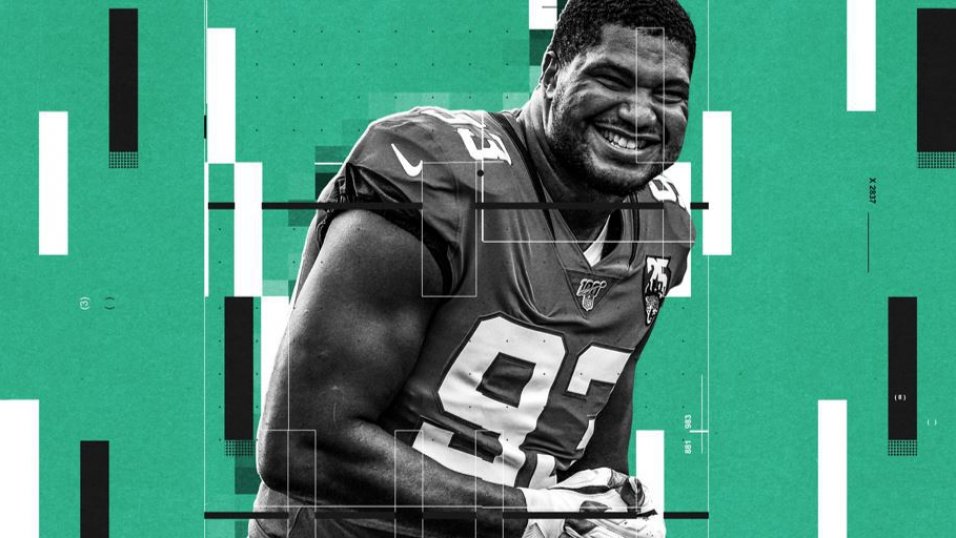 If there is any award in PFF’s portfolio that has been completely owned by one player, it is our award for the NFL’s best run defender, which may as well be (and maybe one day will be) named after Lions interior defender Damon Harrison.

Every year we have given out this award, it has gone to the man they call “Snacks,” and he has done that in multiple different defenses. Harrison has been the gold standard in run defense at any position during his entire career, but injuries took their toll this season, and we saw his first significant drop in production, opening the door for a new winner of the award.

Seizing that opportunity was Jacksonville’s Calais Campbell, who has long been one of the best defenders in the NFL, particularly against the run.

Calais Campbell has just finished his 12th year in the NFL, and despite being over 9,800 snaps deep, he is playing some of the best football of his career. He is 33 years old and just registered his fourth consecutive season with a PFF grade above 90.0. He didn’t achieve the first of those until he was 30, and they have come across multiple different positions.

When he was with the Arizona Cardinals, he was an interior defender and was effectively a true 3-technique alignment most of the time. When he hit the open market and took his talents to Jacksonville, he was moved to the edge in their defensive front, where he has excelled since.

His overall numbers against the run are very good but not spectacular. He had 27 defensive stops against the run this year, seven short of the most by any defensive lineman, and his 13 tackles for loss or no gain are four short of the best mark. His average depth of tackle in the run game was just 1.1 yards downfield, which is impressive, but still almost a full yard behind Aaron Donald.

The key to highlighting Campbell’s performance against the run is in PFF grade because his impact plays weren’t necessarily ones that show up readily in the stat sheet. Instead, they were more about disrupting blocking schemes, forcing adjustments from backs and setting others up to make plays. For that, you need to watch the tape, and the grades come about from watching and documenting what happens on every play of the NFL season.

Take the above play against the Chargers as an example. Campbell is too quick for the right tackle and knifes into the backfield, but a quick cut from Melvin Gordon ensures that Campbell can’t finish the play. Campbell has, however, completely destroyed how the play was drawn up and paves the way for the rest of the defense to tidy it up behind him, limiting the play to a short gain. Without registering on the stat sheet, Campbell directly causes a successful play for the defense and tees up the finish for the rest of his teammates.

Sometimes the Jacksonville defense around him wasn’t good enough to take advantage of the plays he made, and the failings of those around him actually manufactured stats that don’t do justice to the impact Campbell was having up front.

The Jaguars did make use of Campbell’s versatility, lining him up in a variety of different defensive fronts and alignments. Against the Falcons on this play, we see a good example of both of those things in action.

Here the Jaguars have a 3-4 defensive look, and Campbell has to deal with the combination block from the right tackle and first tight end, who, in this instance, is a sixth offensive lineman (#74). Campbell wins inside and is almost able to make the stop on the running back, but the problems happen further inside. Campbell’s job is made tougher because the nose tackle is blown off the ball by his double team, and all of a sudden, there is a huge running lane inside that Campbell has to try and cover. If the nose tackle had been able to stand his ground better, Campbell’s penetration would have closed the space and forced the ball carrier into bodies where he would have been stopped for little gain. However, as things unfolded, the back could force his way through Campbell’s arm-tackle attempt and gain some reasonable yardage on what should have been a dead play.

Ultimately, Calais Campbell has been one of the most impactful defenders in the NFL over the past four years, and this season, he has been the best run defender in the league.