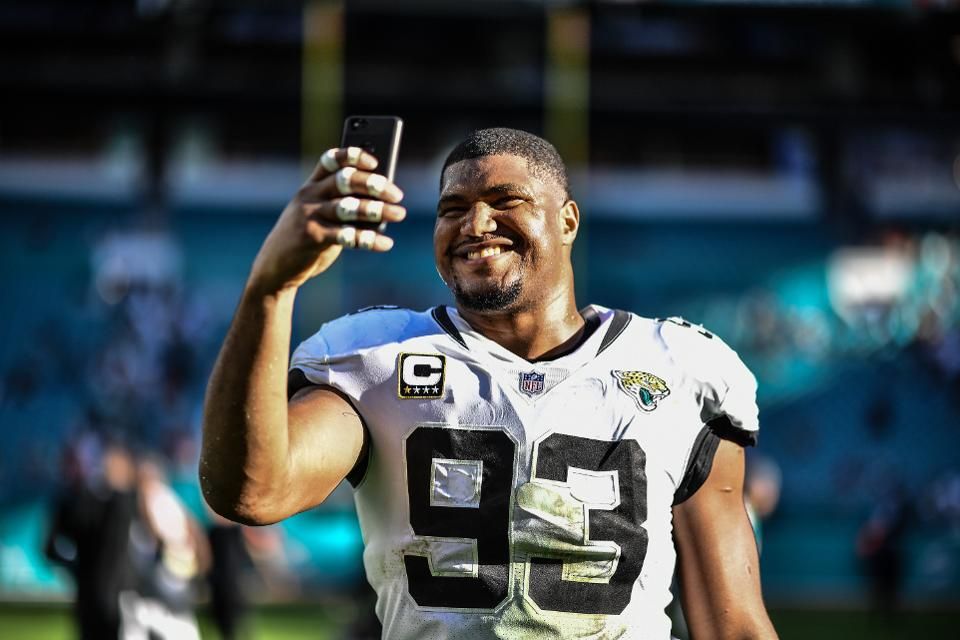 51 games. That is the entirety of Calais Campbell’s tenure with the Jacksonville Jaguars so far — barely even halfway to a hundred.

But in those 51 times he has donned a Jaguars’ uniform and represented Jacksonville, he has done more than most could with thousands of the same opportunities. On and off the field, Campbell has done enough in 51 games to beg the question of if he is already a Jaguars legend.

Campbell spent the first nine years of his career as an Arizona Cardinal and many still think of the desert and red and white jerseys when they consider Campbell’s NFL legacy, but it is the last three years that Campbell has accomplished the most.

Since signing with the Jaguars as a free agent in 2017, Campbell has been elected to the Pro Bowl in each season. Those three Pro Bowls compare to the two he made in nine years in Arizona. Campbell has made only one All-Pro team in his career, and it came with the Jaguars in 2017 when he recorded a career-high 14.5 sacks.

How impressive is this in comparison to other former Jaguars? Campbell is the only defensive lineman in team history to be an All-Pro, and he is one of only two defenders to ever make it to three Pro Bowls.

In 138 games with the Cardinals, Campbell recorded 56.5 sacks. In 51 with the Jaguars, Campbell has notched 31.5, which is already fourth all-time in team history. He is behind Tony Brackens, who recorded 55 in 107 games (over twice as many as Campbell), Yannick Ngakoue, who has 37.5 sacks in 63 games (one whole season more than Campbell), and Joel Smeenge, who had 34 sacks in 84 games.

It is a near certainty Campbell will pass Smeenge if he plays for the Jaguars in 2020. If Ngakoue isn’t in Jacksonville, Campbell would likely pass him too. If he plays another few seasons, he could have a shot at the all-time team record.

And while Campbell has dominated on the field and done things most Jaguars’ defensive lineman don’t do in the entirety of their careers, he has been just as big for the team and community off the field. He is the unquestioned leader of the team; the one young players are told to try to model themselves after. The one whose voice and thoughts rings a little louder than others. The one who players turn to when they need to be heard, and the one who turns to them when they need to be talked to.

Campbell’s impact goes beyond the walls of TIAA Bank Field as well. Through the CRC Foundation, named after his late father, Campbell has taken local youth under his wing to teach them what it takes to be successful in life. In 2019, he donated $100,000 to local organizations such as Feeding Northeast Florida, The United Way of Northeast, and several Denver-based charities. He has hosted 250 kids for youth football and STEM classes, and much, much more.

How Campbell conducts himself on and off the field is so esteemed that he won the Walter Payton NFL Man of the Year award on Saturday, one of the greatest honors an athlete can be given. It is awarded each year to the player who best shows “excellence on and off the field.” He is the first Jaguars player to win the award in the team’s 25-year history.

Campbell also received the Bart Starr Award in 2018, which acknowledged his character and leadership. Any way you cut it, he is a man who has earned respect in every possible way.

Standing at 6-foot-8, Campbell is always a giant. But even if he wasn’t a mountain of a man, he would be a giant in the eyes of all of those involved with the Jaguars for the player and man he is. He hasn’t been a Jaguar for very long, but he has already turned himself into a Jacksonville legend.