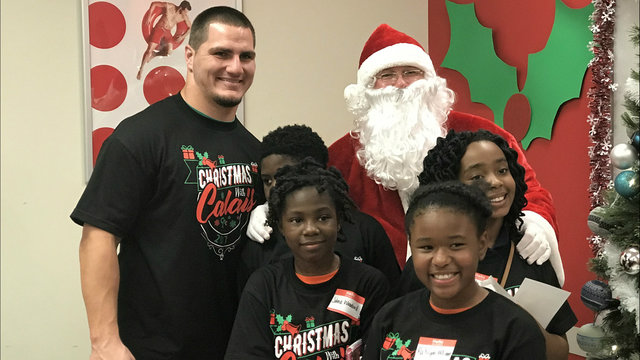 JACKSONVILLE, Fla. – Some dread heading to the mall this time of year, but a group of kids were beyond excited to be at the St. Johns Town Center Tuesday.

This is the eighth year Calais Campbell and his CRC Foundation have helped disadvantaged children with Christmas. He’s held the event nearly every year of his NFL career.

The 40 children from the Tiger Academy and the Johnson Family YMCA didn’t know there was more to the surprise waiting for them.

The Jaguars defensive lineman also arranged to have fellow Jaguars players and cheerleaders join in with the kids. They were there to help the kids spend $200 apiece.

“Calais is one of the people I connected with first with the team since I’ve been here,” Jaguars kicker Josh Lambo said. “He’s just been one heck of a guy, and anything that he does I’m certainly going to support. I’m excited I get to be a part of it, and it’s just a really, really good way to give back to the community.”

The kids were having so much fun that they hardly noticed the math and spending lessons they were learning.

“Hopefully I motivate them to have dreams and set goals, and push themselves hard so they can become successful,” Campbell said.

The restaurant Mellow Mushroom donated the meal for the children..