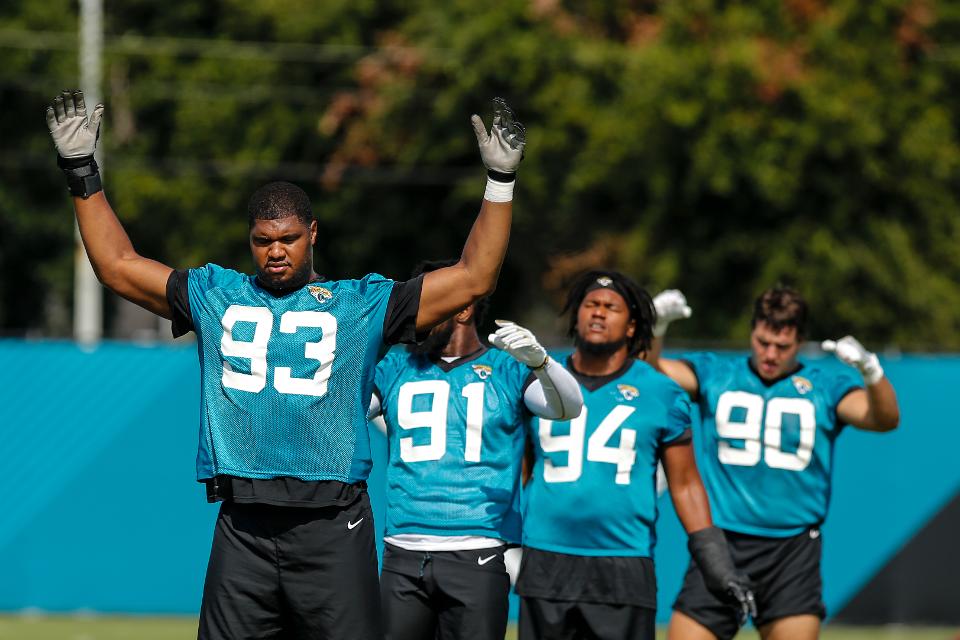 The Jaguars are leaning on veteran defensive lineman Calais Campbell to set the tone for 2019 as a leader both on and off the field. He exemplifies a strong work ethic on a daily basis as the team continues to work diligently throughout training camp at the Dream Finders Home Practice Complex adjacent to TIAA Bank Field in Jacksonville, FL.

“We want to be the hardest-working team in the league,” Campbell told reporters in Jacksonville, FL. “We’ll gradually get there. I think it’s going to be beneficial for us.”

Campbell already has the reputation for being one of the league’s elite players. He was recently named to the NFL’s Top 100 Players of 2019 by the NFL Network. The Jaguars also recognized Campbell’s value during the offseason and his desire to stay in Jacksonville so they restructured his contract. The organization exercised a $3 million option bonus for 2019. In 2017, he signed a four-year, $60 million contract including a $6 million signing bonus, $30 million guaranteed and an average salary of $15 million according to Spotrac.com. This year, he will earn a base salary of $12 million and a signing bonus of $3 million while carrying a camp hit of $14.5 million and a dead cap value of $5 million also per Spotrac.com.

Campbell, who stands 6-8 and weighs 300 pounds, is certainly large in stature but he is even bigger in character. He is dedicated to staying in shape, which is a quality the younger Jaguars players can emulate. This year, Campbell noticed a change in head coach Doug Marrone’s approach to training camp and he intends to use that to his advantage.

“It’s way different. It’s a nice change, though. I think the team is maturing and he’s allowing us to be pros and to kind of do what we need to do to get ready,” Campbell told reporters in Jacksonville, FL after day two of training camp. “We’re still working really hard, getting a lot of good quality reps out there, competing. I mean it’s really iron sharpening iron. It’s great to see.”

Campbell said the team’s overall schedule is different so the players have more free time to condition their bodies. Working hard is something that comes naturally to Campbell. The 32-year-old understands the benefits of a strong year-round work ethic.

Campbell witnessed first hand how hard former teammates Larry Fitzgerald and Adrian Wilson worked in Arizona. He points to their longevity in the game as being the result of a strong work ethic.

“I studied guys like Jerry Rice, and Ray Lewis, and Bruce Smith and Reggie White and those guys. Everybody who talks about them says that they’re the hardest-working guys, so I try—I don’t know if I’m on that level, but I try to work as hard as I can,” Campbell noted.

Early on Campbell has noticed a difference with the Jaguars’ overall team conditioning.

“Well, I’ll say that there’s an energy. There’s just a pep in a step and I think that comes from being in quality shape. Guys are ready, focused, locked in. I think it’s not even just physical shape, but I feel like guys are very locked in on knowing what to do too early on,” Campbell said. “I think that we’re a lot further along then we could be at this point in time, but there’s still a lot of work to do.”

Campbell attributes Jacksonville’s focus and determination to the team’s disappointing 5-11 season in 2018.

“I think that anytime you come off of a season where you didn’t do as well as you wanted to, guys kind of—you develop a chip on your shoulder again,” he said. “I’m sure you can see it around when you look at guys, they’re working hard trying to earn back that respect that we once had, and I think that comes from just the daily grind and you can see the guys that have been working really hard and very much inspiring. We’re an inspired team right now.”

While Campbell feels inspired, he also acknowledges the team is being careful with him due to his age.

“It’s tough because I like to be the hardest-working person on the field. That’s kind of been my M.O. the majority of my career, and so when you know you’re taking reps off and you’re not getting as much, you’re not the hardest-working person on the field at all, so it’s a balance,” he admitted. “But I also know that you only get so much tread on your tires and so I have to be smart and take advantage of allowing my body to adjust slowly. I can’t just go out here and act like I’m 25 again, you know? But it’s a balance, so I got to push myself and work as hard as I can, but also take care of my body as much as I can, too. The coaching staff, we sit down, we talked about—or put together a good quality plan and well see how it goes, just take it one day at a time and I’m making sure I’m trying to be the best I can be.”

Campbell and his Jaguars teammates are off on Monday and return to training camp on Tuesday.