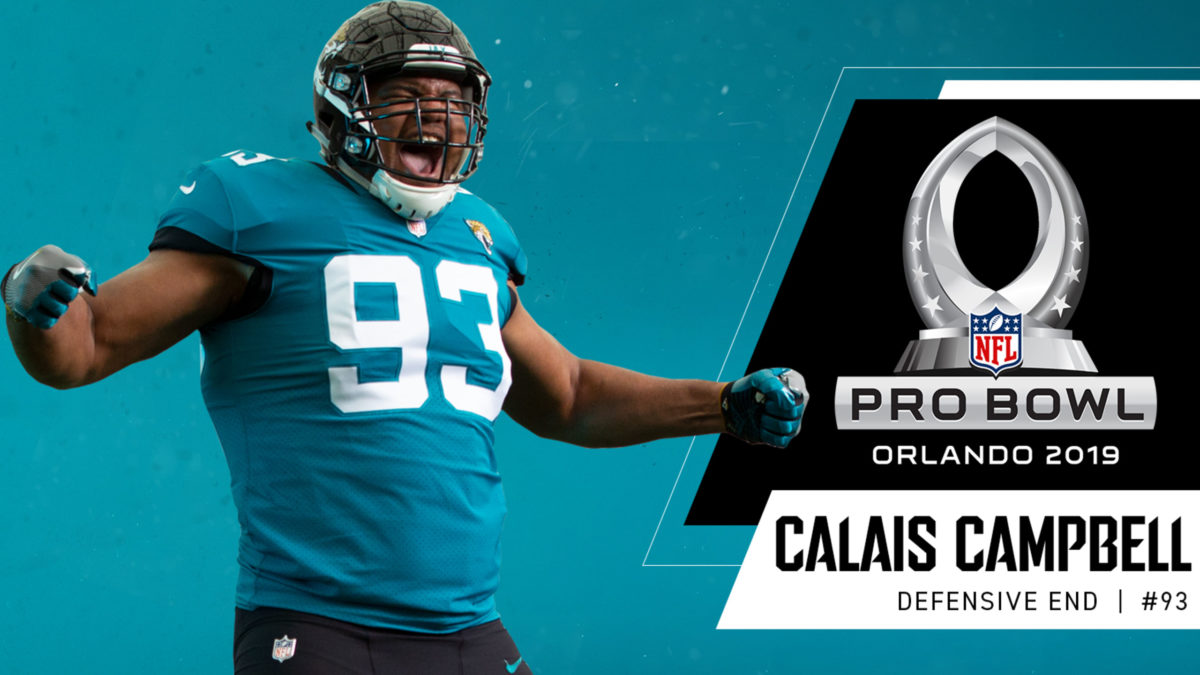 This marks Campbell’s fourth career Pro Bowl selection (2014, 2015, 2017, 2018). He’ll join CB Jalen Ramsey as the two Jaguars players selected to this year’s Pro Bowl, both of whom are making their second consecutive Pro Bowl appearance. Campbell finished the 2018 season with 72 tackles (53 solo), including 20 tackles for loss and 10.5 sacks. He also added 22 QB hits, two passes defensed, one forced fumble and one fumble recovery. Campbell’s 20 tackles for loss were tied for the third-most in the NFL, and according to Pro Football Focus, his 43 run stops were the most ever by an edge defender in a single season. For his career, he has totaled 631 tackles (474 solo), 141 tackles for loss, 81.5 sacks, 47 passes defensed, 12 forced fumbles and 10 fumble recoveries.

“I am grateful for the opportunity to represent my family, the Jaguars organization, my teammates, my coaches and all of our incredible fans at this year’s Pro Bowl,” said Campbell. “Although this season didn’t go as any of us had planned, the Pro Bowl provides one final opportunity to throw on the pads and lace up the cleats before turning the page to a new chapter. I’m grateful to be returning to Jacksonville for the 2019 season and I know that we have the people and the mentality to get this turned around and bring playoff football back to Duval County.”

This season, Campbell was also recognized by his peers around the league as the Bart Starr Award winner for his outstanding character and leadership in the home, on the field and in the community. Campbell is the first player in Jaguars history to win the Bart Starr Award. In addition to his stellar play on the field, Campbell is very active in the community, running the CRC Foundation named after his late father, Charles Richard Campbell. The foundation strives to educate youth on critical life skills through sports, vocational platforms, financial training and health and nutritional awareness, among other programs. The award was first presented in 1989 and the list of recent award winners includes Peyton Manning, Drew Brees, Thomas Davis and Jason Witten. He will receive the award on Feb. 2 in Atlanta at the 32nd annual Super Bowl Breakfast.

In his first season with the club in 2017, Campbell broke the team’s single-season franchise record with a career-high and AFC-leading 14.5 sacks, en route to first-team All-Pro honors from the Associated Press. After posting 10.5 sacks during the 2018 campaign, he became the first player in franchise history to post double-digit sacks in consecutive seasons. Campbell is one of eight players to post at least 10.0 sacks in each of the last two seasons.

Campbell, 6-8, 300, originally joined the Jaguars after he was signed as an unrestricted free agent on March 10, 2017, following a nine-year career with the Arizona Cardinals. Campbell joins Tony Brackens (1999) and Yannick Ngakoue(2017) as the only defensive ends to be named to the Pro Bowl in franchise history.

For the third consecutive year, Pro Bowl Week festivities will take place at ESPN Wide World of Sports Complex at Walt Disney World Resort and across the Orlando area, bringing free experiences and activities to fans as well as an extraordinary number of events focused on commemorating all levels of football — from youth to high school to the NFL’s best. Some of the Pro Bowl Week events include: Pro Bowl Practices, Pro Bowl Skills Showdown, NFL FLAG Championships Powered By USA Football and Play Football Celebrity Flag Game.