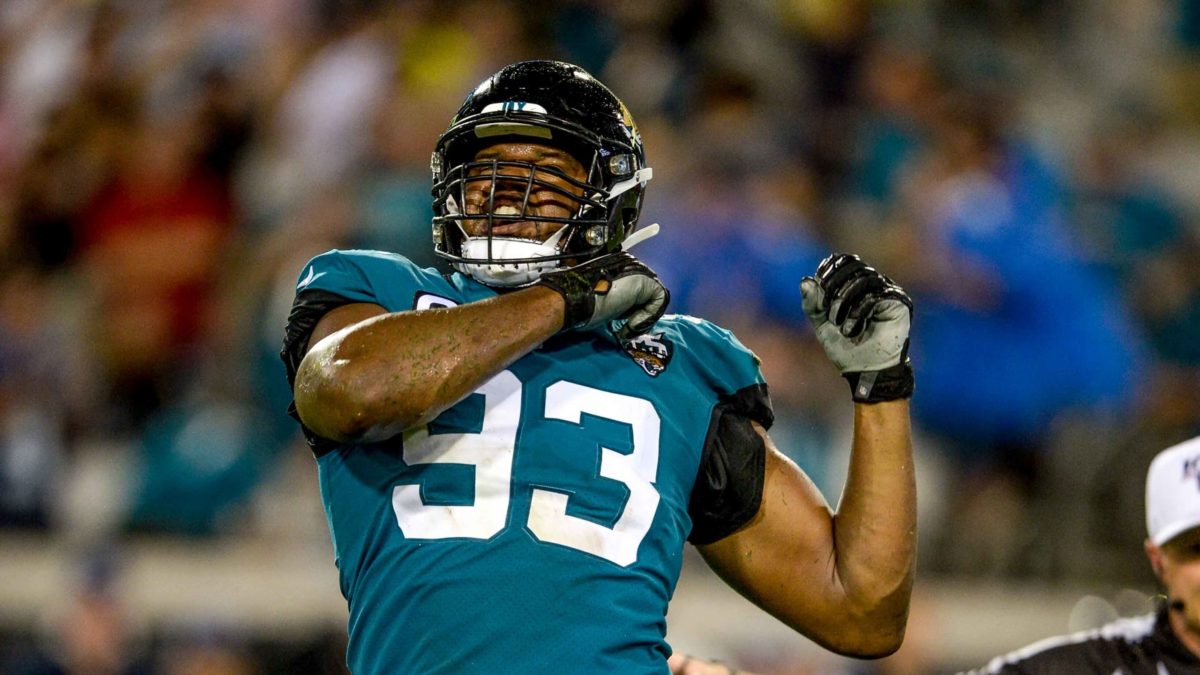 That’s one reason defensive end Calais Campbell is among the most respected players in the Jaguars’ locker room, but here’s another:
Twelve years in, he’s good. Really good.

And if that sometimes gets lost when discussing the Jaguars’ veteran defensive end, cornerback A.J. Bouye said that shouldn’t be the case. Because for whatever other positives there are about the 12-year veteran, it must be remembered that he’s an elite talent and critical to the Jaguars’ defense.

“I feel like he’s always been overlooked,” Bouye said of Campbell this week as the Jaguars (1-2) prepared to play the Denver Broncos (0-3) at Empower Field at Mile High. “One thing about it: he’s still doing it at a high level.”
Indeed.

Campbell, the Jaguars’ defensive co-captain, is such a commanding locker-room presence that it’s possible sometimes to overlook his production. And make no mistake: he’s still productive, as evidenced by a three-sack performance last Thursday against the Tennessee Titans.

Campbell on Wednesday was named the AFC Defensive Player of the Week, the second time he has been so honored since joining the Jaguars before the 2017 season as an unrestricted free agent from the Arizona Cardinals.

Campbell’s body of work with the Jaguars speaks for itself. His 28 sacks during that span are third in the NFL, and he made the Pro Bowl each of the past two seasons. He was first-team Associated Press All-Pro in 2017, when he was a runner-up for AP Defensive Player of the Year.

Teammates on Wednesday spoke about why he has maintained that level at what for the NFL is an advanced age, focusing on the professionalism with which he approaches the game and the desire he still has to play it well.

Defensive tackle Abry Jones at first joked that the reason Campbell continued to be a dominant presence was simple.

“‘Cause he don’t practice on Wednesdays,” Jones said with a laugh, referring to Campbell’s occasional Wednesdays off during the regular season to ease the toll on his body.

Jones was more serious when discussing what has allowed Campbell to remain effective.

“He’s always a personally driven guy,” Jones said. “You don’t have to motivate him. He’s always ready to go. He’s just a pro.”
Ngakoue was asked what made Campbell so effective so deep into a four-time Pro Bowl career.

“Mental,” Ngakoue said. “Preparation doesn’t change for him. He’s doing the same thing he was doing a couple of years ago when he was having his All-Pro year. His preparation is key. It’s what helps him thrive. He’ll tell me he might not be as fast as he wants to be because he’s getting older, but his understanding of the game is raised. When you know the play is coming before it comes … Bro: you’re going to make plays all day long.”

The mental approach is one key to Campbell’s success. Jaguars Head Coach Doug Marrone on Wednesday touched on another when discussing Campbell’s dedication to maintaining his body, something Jones said he recently witnessed personally.

“He stayed at my house for the hurricane stuff [early this month],” Jones said with a laugh. “All he does is recovery stuff. I just take a nap, but he’s always doing stuff.”

Jones also said Campbell thrives within the Jaguars’ defensive line rotation, with some of Campbell’s best Jaguars games coming in some of the best team sack games in franchise history. His team-record four-sack performance against the Houston Texans in 2017 Week 1 came with the team setting a franchise record with 10 sacks.

Campbell’s three-sack performance Thursday came in a game in which the defense recorded nine sacks.

“Calais has told me himself: The way he feels about this D-Line, he feels more comfortable, he feels more like himself,” Jones said. “When we go in, it’s not like, ‘Let me go ball for myself.’ It’s like, ‘We’ve got to ball total.’

“Being this close group around a terrific player like him, with the motor he has and the internal motivation he has, it makes us better. And having a group like ours that’s shown him, ‘Hey, we’re ready to follow, you lead’ … it’s perfect.”

If that approach starts with the line, Bouye said it extends to the entire defense – and is part of what makes Campbell’s individual success key to an overall defense that once again could be one of the NFL’s best.

“That’s one thing I respect about him: even if he doesn’t make a play, he’s wanting others to make a play,” Bouye said. “You don’t have a lot of players like that. It just shows his selflessness. He’s willing to put the team first, his other teammates first and put himself in a position to make it easier for other guys.

“This far into his career, he’s still doing the same thing. It’s amazing, how he’s able to turn it on come game time.”