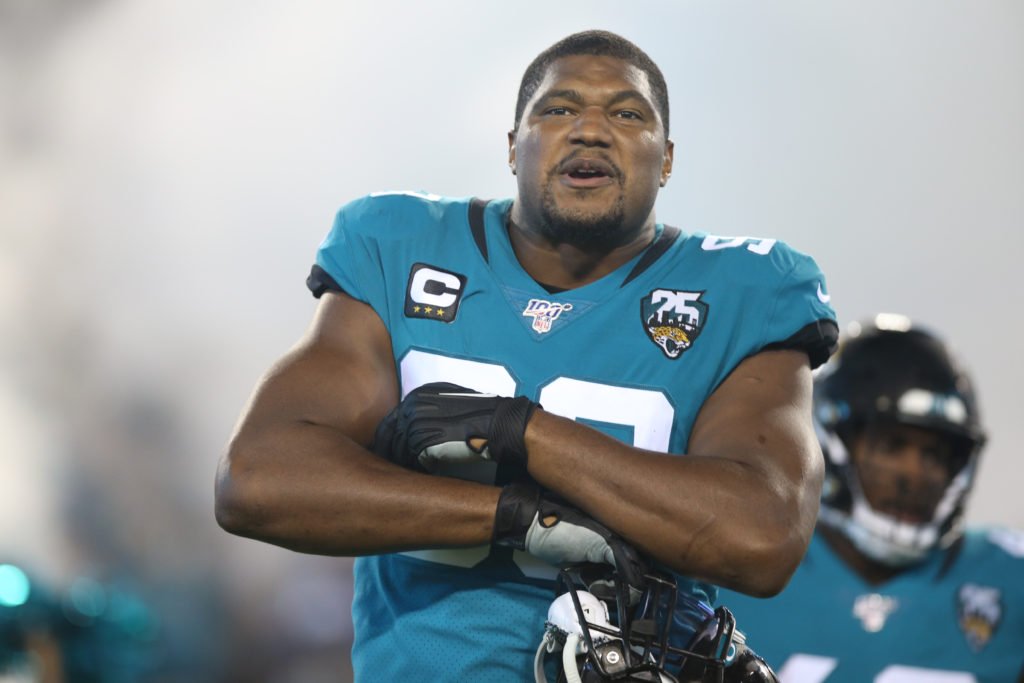 JACKSONVILLE, Fla. — The 2004 production of “Once On This Island” at South High in Denver looks like every high school play.

A video taken then shows a line of earnest singers projecting into a cavernous hall backed by a tinny piano.

One of the actors is in the background but stands out. He is a head taller than everyone else, but there’s no other hint that Calais Campbell is destined for a storied NFL career.

It was his senior year, and Campbell was becoming more and more interested in the arts. He was already an anchor on “Rebel Report,” the school’s weekly TV show, and he felt ready to take his talents to the stage.

“He was involved with pretty much everything in school,” said Rich Cole, the school’s multimedia teacher. “He was a nice kid, which made it so interesting. Big guys who play on the football team sometimes carry an attitude with them, but he didn’t have that. He was friendly to everyone.”
That year, basketball season was still going on for several more weeks, and Campbell didn’t want to shirk his responsibilities to either.

But Campbell and Jennifer Rinaldi, the school’s theater director, reached a compromise: The gigantic three-sport athlete with the personality and charisma to match would miss the first few weeks of rehearsal until basketball season ended. Then it was on him to learn his parts in the production, which tells the story of a young girl on a tropical island who brings people together through the power of love.

“He is a renaissance man,” said Rinaldi, who also teaches English. “And he was not willing to do anything by half-measures. If he was going to participate in something, then he committed to it and gave it 110 percent like he always does.”

Learn he did. Once basketball season ended, Campbell memorized the words to the songs, the movements to the dances and his positioning on stage. By no means was he the lead actor, but he was involved. In various scenes, Campbell was a tree, a frog and one of the men on the island.

“He didn’t have the lead because he’s not the greatest singer in the world,” Rinaldi said, “but he was fantastic.”

Campbell will be playing in front of a significantly larger audience Sunday at Empower Field at Mile High, a trip that brought memories flooding back to those who knew him as a kind-hearted, multitalented high school student years ago.

The Jaguars (1-2) face the Broncos (0-3) at 4:25 p.m. ET. It’s the latest chance for them to push aside the drama surrounding cornerback Jalen Ramsey and remain competitive in an eminently winnable AFC South.

It will be just the second time Campbell has played a regular-season game in Denver since he entered the NFL in 2008 and will complete a series of personal homecomings.

Two years ago, Campbell and the Jaguars played at Arizona, where he spent the first nine years of his career. Last year, they traveled to Miami, where Campbell played college ball. On Sunday, it’s a trip to face the team he spent most of his life cheering on.

“When I was 6 until really to 21, all I wanted to do was play for the Broncos,” Campbell said. “I was a die-hard Broncos fan. That was my longtime dream. Then you get to the NFL and your loyalty is to the team you’re on. If I have to play against the Broncos, you hate the Broncos in that moment and you lose all the love.”

Campbell doesn’t have many fond memories from his only other NFL game in Denver. That came in October of 2014 when he was on the Cardinals and was frustrating for a couple of reasons beyond a 41-20 loss.

On that day, Campbell intercepted Broncos quarterback Peyton Manning and was rumbling toward the end zone for what looked to be a 28-yard touchdown only for Manning to tackle him at the 5 as he fell to the turf.

Arizona scored on the following play, but Campbell has taken a lot of ribbing through the years from friends, family and teammates.
“Peyton Manning tackled me,” Campbell said. “It don’t make no sense.”

Later in the game, Campbell was injured on a cut block by Broncos tight end Julius Thomas. Campbell sat out the next two games that season. He hasn’t missed one since.

“I was on my way to having a monster game, too,” Campbell said.

Adam Kelsey has seen many other monster performances from Campbell. Kelsey is currently South High’s athletic director, but he was the boys basketball coach when Campbell was in school.

Campbell was a better football player, totaling a Colorado-record 57 career sacks to draw attention from colleges around the country. But he was also a talented basketball player, able to bruise opponents with his size and beat them with his motor.

Campbell had Division I offers to play football and basketball. He also competed in track and field.

“He was incredibly well-rounded and got into all different types of things,” Kelsey said. “He wasn’t just here to play football and that’s it. He could have had the biggest head because he was one of the best football players in the state and the best athlete in our high school. But instead, he was good to everybody. He was the kind of kid who if there were kids who didn’t fit in, Calais would try to get them involved in things.”

“His kindness to everyone is the most remarkable thing I always think about him,” Rinaldi said. “He was always respectful to adults and everything like that; that was instilled in him. But he was so nice to everyone.”

Said Kelsey: “As far as leadership goes, all the kids I’ve seen in 20 years here, he’s at the top. Just amazing stuff in regard to how he inspired other kids. And not just in sports. He was just an excellent, excellent kid.”

Kelsey plans to attend Sunday’s game, the first time he will get to see Campbell on the field in the NFL. The timing couldn’t be much better.

Campbell is the reigning AFC Defensive Player of the Week after putting together a dominant three-sack performance during a 20-7 win over Tennessee in Week 3.

Now in his 12th season, Campbell has more games played (173) and starts (155) than any other active defensive lineman. And he’s still performing at a high level: His 28 sacks since signing with the Jaguars prior to the 2017 season is third-most in the NFL behind Arizona’s Chandler Jones (33) and the Los Angeles Rams’ Aaron Donald (32.5) over that period.

This season, the Jaguars are tied with New England for the most team sacks at 13, which is critical for a defense that has allowed just one touchdown apiece to division opponents over the past two games. Broncos quarterback Joe Flacco has been sacked 11 times, tied for fourth-most in the league.

Jacksonville’s coaching staff was careful to manage the 33-year-old Campbell during training camp and the preseason. He has since battled a foot injury, but his effort against the Titans showed he can still be one of the game’s disruptive forces.

“Calais has got a lot of football in him if we manage him right,” Jaguars defensive coordinator Todd Wash said. “And if we don’t, then that’s our fault. But if we manage him, he still can make a lot of plays like he did last week.”

Although she isn’t much of a football fan, Rinaldi plans to watch Sunday’s game. How could she pass it up? On one side of the field will be Campbell. On the other will be Broncos running back Phillip Lindsay, another South alum.

Rinaldi taught both players, though only Campbell took part in a school play. And both are playing well. Lindsay scored two touchdowns in a loss to Green Bay last week, and all three of Campbell’s sacks on the season came against the Titans.

For Rinaldi, strong performances from each would be a perfect compromise.

One day soon, both players are likely to have their numbers retired by the school. When Campbell is honored, it will be as much for what he did off the field as what he did on it.

“There were teachers who loved Calais and they knew nothing about sports,” Kelsey said. “They remember him as a kid who they loved having in class because he was fun, had a great attitude, worked hard, cared about getting good grades and was just a pleasure to have in classes.”