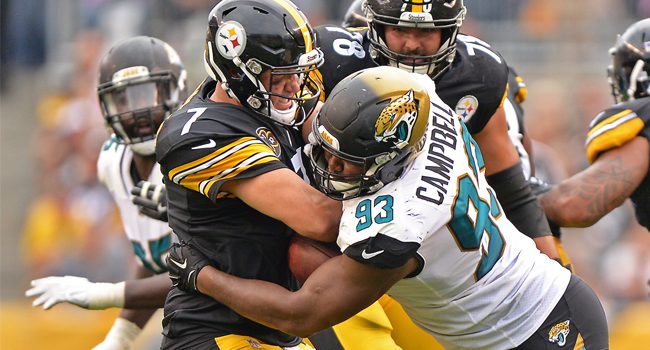 And on Wednesday, the Jaguars’ veteran defensive end received one of the biggest possible.

Campbell, who led the AFC in sacks in his first Jaguars season this past year, on Wednesday was named the 2017 Defensive Player of the Year by the Pro Football Writers Association.

“It’s a true honor to get any kind of accolade, especially one that’s as prestigious as that,” Campbell said Wednesday as the AFC South Champion Jaguars (12-6) prepared to play the AFC East Champion New England Patriots (14-3) in the AFC Championship Game at Gillette Stadium in Foxboro, Massachusetts, Sunday at 3:05 p.m.

“It’s a testament to hard work. Hard work has paid of consistently in my life and with this team. For us to be here, where we are right now, it’s because we put the work in and sacrificed a lot to be here.”

Campbell, who signed with the Jaguars as an unrestricted free agent from the Arizona Cardinals in March, became the first player in Jaguars history to be named Defensive Player of the Year by the PFWA.

Campbell, who registered a career-high and franchise record 14.5 sacks this past season, has been named a Pro Bowl starter at defensive end, an Associated Press first-team All-Pro at the edge position, a PFWA All-Pro and the NFL 101 AFC Defensive Player of the Year.

“Has been outstanding,” Jaguars Head Coach Doug Marrone said. “One of the things I have learned this year about him, just the versatility that he has, to play among the whole defensive line and be productive in all different areas. There are a couple of guys in this league that do that, but to have that type of production, there are only two or three.”

Campbell registered 67 tackles with 14 tackles for loss, three forced fumbles, three passes defensed and a fumble recovery. He returned the fumble 10 yards for a touchdown against the Cardinals.

“I just love, me personally, when you ask him about his success he’s going to tell you it’s about something else,” Marrone said. “I think he’s a great pro and he’s one that for all of our young players, for myself or our scouts, for our coaches … those are the type of guys you are trying to get on your team.”

“This is my first year really seeing Calais in person in action,” Jaguars linebacker Myles Jack said. “He’s unblockable. I love having him on the defense with me. He deserves Defensive Player of the Year. I’m happy for him. I got to get him a gift.”