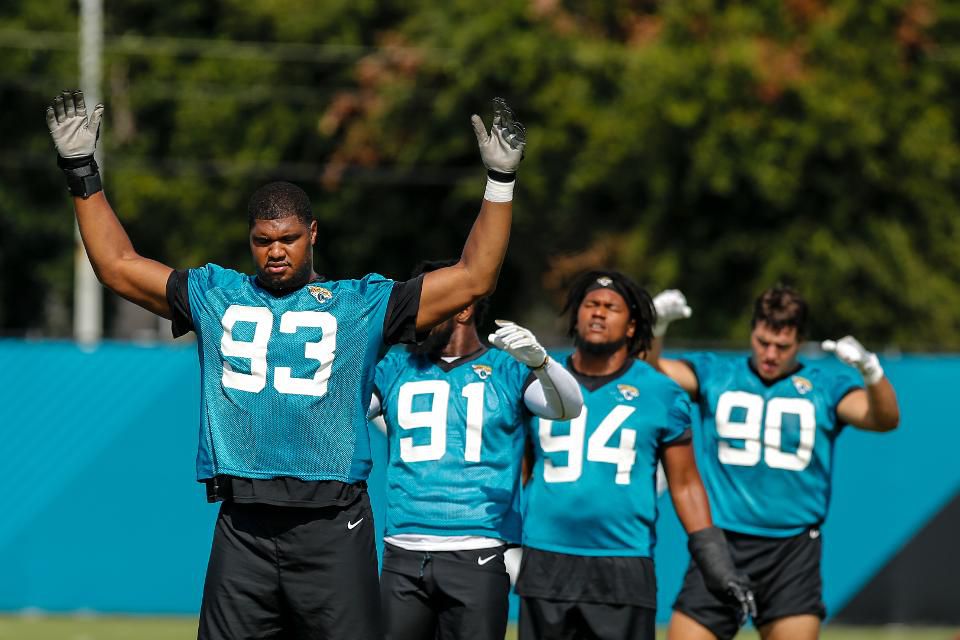 Jaguars defensive lineman Calais Campbell sent out a tweet this week asking, “What do you get when you have 4 pro bowlers on one D Line?”

The responses to his tweet included “#Sacksonville” and “Hoist the Lombardi!”

Jacksonville’s defensive line Pro Bowlers last season were Campbell, Malik Jackson and Yannick Ngakoue, and Marcell Dareus made two Pro Bowls with the Buffalo Bills. They make up an intimidating defensive line, and the Jaguars have invested quite a bit in them.

For the investment to pay dividends this year, the defense needs to continue to build on last season, which produced an AFC South title. The stinginess of this incredible defensive line, arguably the best in the National Football League, coupled with the steadiness of quarterback Blake Bortles can lead to good things in Jacksonville.

Last year the defensive line emerged as one of the most productive pass rushing units in the league, finishing the season with 55 sacks, second in the NFL. Four players tallied at least eight sacks (Campbell 14.5, Ngakoue 12.0, Jackson 8.0 and Dante Fowler 8.0). The Jaguars also had the league’s best passing defense in the regular season, holding opponents to a 68.5 passer rating and allowing just 169.9 net passing yards per game (both the fewest in the NFL).

Despite the impressive numbers, there are some challenges ahead for the defense. With the the loss of highly respected linebacker and team leader Paul Posluszny, who retired last season, players like Campbell and linebacker Telvin Smith need to step up both on and off the field. They know what it takes for this defense to get to the next level.

“Every great defense has won it all. That is what we want to be. A great defense is not mediocre. It is not to say you won a couple [division] championships. No, we want to say we dominated the world,” Smith said.

Finishing games is a hot topic these days in Jacksonville. It is something Campbell knows can take them to the next level.

“There were a couple of times last year where we had the game on the line and we let them get a first down. Our defense, as talented as we are and as tough as we are, that can’t happen,” Campbell noted. “We got some work to do, and we’ve been talking about it. Coach [Todd] Wash does a really good job preparing us, so it’s got to come down to execution.”

“We have to have that mentality of crunch time. We know we are not frontrunners. We can bang with you. We just have to put our foot on your throat and keep it there from the beginning to the end,” Smith added.

The confidence of the defense is backed up by hard work. As talented as the team is, the players understand the work that needs to be done, especially during training camp. Campbell called the Jaguars probably the hardest-working team in the league.

“That’s a big statement because a lot of teams are working hard right now and doing things, but they ask a lot of us, but the guys sit there and respond,” Campbell said. “We got out there, we push ourselves, and with that talent and that mentality and the work ethic, we should be pretty good.”

And if Campbell gets his way, there will be some home playoff games at TIAA Bank Field this January.