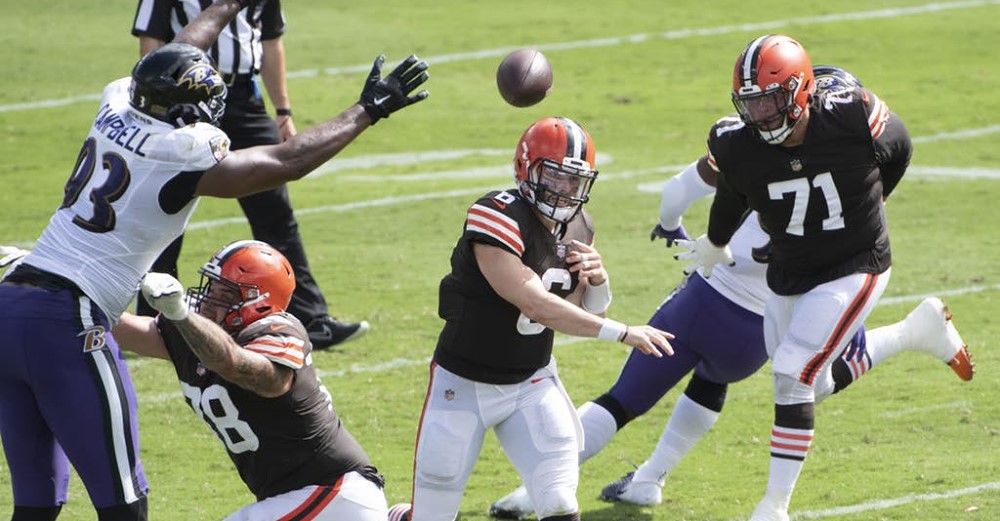 OWINGS MILLS, Md.— Ravens defensive end Calais Campbell knocked down a pair of passes in the Browns opening drive in the regular-season opener.

The second deflection was caught out of the air by cornerback Marlon Humphrey that led to Baltimore’s first touchdown in the 38-6 rout.

Campbell was the Ravens’ biggest offseason signing and he’s wasted no time making an impact with his new team.

“You saw the impact that he made in the Cleveland game with the three ‘PBUs’ [pass breakups],” Baltimore defensive coordinator Don Martindale said. “I think that somebody wrote somewhere that that’s a career-high; I’d have to check that. I don’t know if that’s true or not.

“But who besides us will take [Space Jam’s] ‘The Monstar,’ who’s probably going to go down as a Hall of Fame pass rusher at the end of his career, and drop him out on the first third down and he causes an interception? [He’s] one of the most unselfish players I’ve ever been around, and he’s been great since he’s been here. It’s a lot of fun to have him.”

Campbell finished his debut in Baltimore with a tackle and three passes defended.

“It’s crazy because I feel like I didn’t play as good as I wanted to. I left a lot of plays out there,”Campbell said. “But to still be able to affect the game and be able to win the way we did, that’s just a testament to our preparation. We had an incredible camp, and it showed.”

He has ranked in the top 20 for tackles for a loss in each of the past three seasons and provides the team an effective interior pass rusher — an area of need from last year.