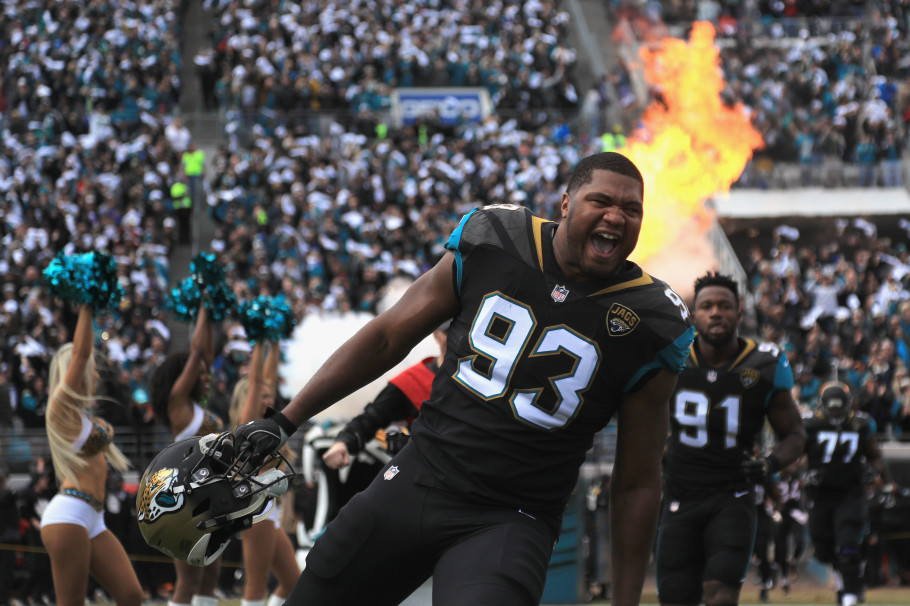 For so many years, Broncos players were only television images for Calais Campbell.

Like thousands of kids growing up in the Denver area in the late 1990s, Campbell had affection for Broncos stars Terrell Davis, Steve Atwater and Shannon Sharpe, but no personal connection.

That changed during Davis’ visit to the Denver Police Athletic League to see Campbell’s team. A hand-shake. A picture. A conversation. And an impact.

“He made me believe the NFL was a real opportunity for me,” Campbell said.

“After that moment, I don’t think Calais ever doubted he was going to make it in football,” Jared said. “He knew if he worked hard, he would be successful.”

The ensuing two decades have been full of football and life success for Calais, who returns to his hometown Sunday when the Broncos host his Jacksonville Jaguars. High school domination at Denver South. Success at Miami (Fla.). And 84 1/2 sacks in the NFL as a defensive lineman.

Family and friends will be in attendance, including his mother, Nateal, who lives in Arizona, and his older sister, Kimba Blaylock, who lives in Aurora.

A 6-foot-8, 300-pound giant on the football field, Campbell’s presence is just as large off the field. The Charles Richard Campbell Foundation, named after his late father, has held numerous charity events in Arizona and Florida. And last week, Calais, winner of the 2018 Bart Starr Award for character and leadership, announced donations to four Denver-area organizations.

“It’s always been important to me,” Campbell said in a phone interview with The Denver Post. “It was instilled in me from both my parents that it’s your duty to be involved in the community and help people.”

Charles and Nateal Campbell had eight kids (six sons and two daughters). They always made sure their children were active in athletics, honed in on their academics and developed a compassion for others.

Calais was asked in what ways he was influenced by his father, who died in 2003.

“Too many to count,” Calais said. “But one of his biggest things was that he always spoke to everybody. He wanted to volunteer and be a person of value in the community. As I got older, I appreciated the value of that.”

And, Charles Campbell understood the value of being at his children’s sporting events.

“He was at every game,” Blaylock said. “He was even out there for Calais’ games with the video camera getting the good plays and putting those tapes together so he could present it to colleges to showcase Calais’ talent.”

Although Calais outgrew his parents and siblings, he shares one characteristic with Charles.

“When Calais laughs, I hear my father,” Blaylock said.

At times things were difficult, though, due to financial struggles. In recent years, Calais has opened up about his family’s temporary stay at a homeless shelter when his parents lost their jobs. And Jared passed along a story about a coach’s generosity when he and Calais were kids.

“We were poor, actually,” Jared said. “There was a coach who had a non-profit who helped kids in need. He gave us $75 gift cards to buy equipment.”

Charles got a job with Comcast in technical support through Calais’ high school years. Jared said his father’s issues centered on Hepatitis B, an infection that can cause liver failure. He died when Calais was a high school senior.

“He was pretty strong so I guess he knew he was sick but didn’t show it,” Jared said. “The last couple of months, we started to know it was serious.”

Before he passed away, Charles was able to enjoy watching Calais be a one-man wrecking crew at Denver South. In football, he had 57 sacks, a state record. In basketball, he led the state in rebounding (16.3) and blocked shots (3.3) as a junior. In track and field, he qualified for the state meet in the discus and shot put.

Campbell chose Miami over Colorado State, Nebraska, LSU, Michigan and Oklahoma. When he enrolled, he was listed as 6-foot-7 and 230 pounds. A second-round pick by Arizona, he played in the Super Bowl as a rookie.

Near-homecoming in 2017
In March 2017, an 11th-hour pursuit by the Broncos nearly brought Campbell home.

The Jaguars and Washington started their free-agent pursuit of Campbell at $11 million per year, went up to $12 million and the Jaguars offered $14.75 million. The Broncos emerged with a two-year, $26 million offer with a third-year option for $12 million.

Wanting Campbell to lead their culture change, the Jaguars closed the deal with a four-year, $60 million contract.

“It was a tough decision,” Campbell said. “The emotional factor of being a Denver Broncos fan all my life until I got drafted to the NFL, it was hard not to choose Denver. But I tried to take the emotions out of it and make a decision that was best for me as a player. I played some good ball in Arizona, but scheme matters. I knew this defense (in Jacksonville) would fit my skill set.

“Looking back, I think I made a really good choice.”

Campbell made a good choice and the Jaguars made a terrific choice.

In Campbell’s first year with Jacksonville, he had 14 1/2 sacks, was named first-team All Pro and led the Jaguars from 3-13 to 10-6 and a berth in the AFC title game.

“They set him free!” Jared Campbell said of the Jaguars’ 4-3 scheme. “In Arizona, he would make good stats, but that would allow the outside rushers to get 8-10 sacks. In Jacksonville, they let him move along the line and he’s so hard to block 1-on-1.”

Said Jaguars coach Doug Marrone: “He’s been outstanding for us. I really don’t know if there’s enough (newspaper) column space to really talk about the impact that he’s had. He’s a special type of person.”

The Denver PAL is particularly important to Campbell. Starting next year, the organization will begin a scholarship fund to help single-parent/low-income kids pay a portion of their league fees. Jake Schroeder, executive director of the PAL, estimated the PAL will have activities for up to 2,000 kids this year.

“(The donation) was gigantic and it’s really perfect for us,” Schroeder said. “(The scholarship program) fits in perfectly to what (Campbell) has talked about, helping kids who can’t afford to play sports.”

All these years later, Calais is paying things forward with a nod toward his father.

“Calais has always been a giving person with a kind heart and wanting to help in any way he could,” Blaylock said. “It’s part of his soul. It’s what he was meant to do.”