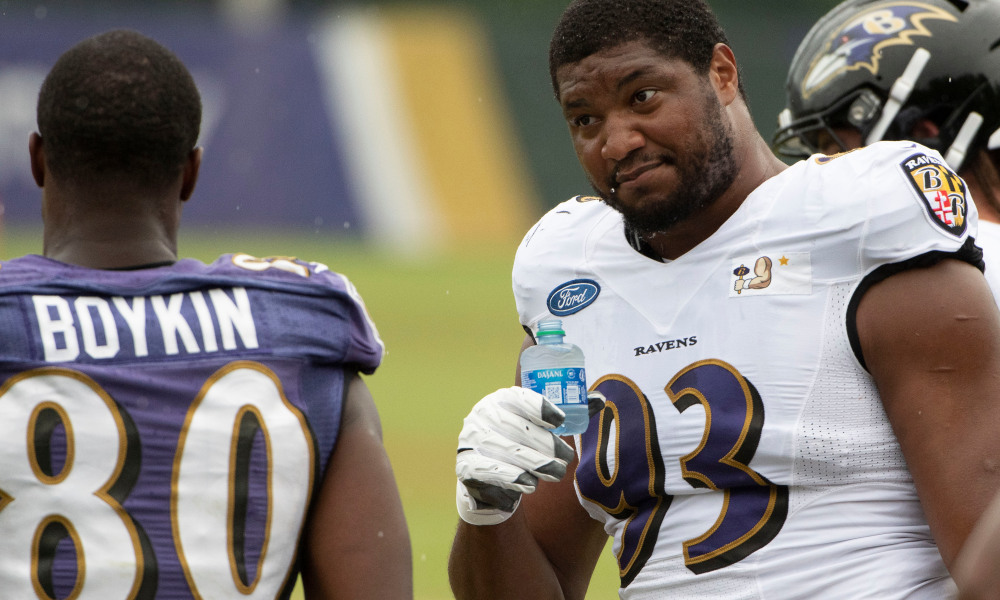 It is as testament to the work of Ravens general manager Eric DeCosta, as well as former general manager Ozzie Newsome, that Baltimore’s NFL team has as complete a roster as you’ll see in the NFL. That’s why they went 14-2 last season and led the league in Total DVOA by an absolutely crushing margin.

But the Ravens’ one obvious roster liability was the one that killed them in the playoffs. They were able to overcome the lack of a true top-tier pass-rusher by blitzing the living daylights out of every quarterback they faced (a league-leading 54.9% blitz rate in 2019 and a 47.1% blitz rate this season), but they were not able to stop the run at a credible rate. And that’s why, in their divisional round against the Titans, the Ravens were waylaid by a 10-6 regular season Titans team that had to change quarterbacks halfway through the season. Running back Derrick Henry defined the game with 30 carries for 195 yards, averaging 4.2 yards after contact per carry.

For a team that was used to dictating the action with the most advanced run game in the NFL, this was a profound embarrassment. It didn’t help that Lamar Jackson looked lost at times against Tennessee’s disguised coverages, but the inability to stop Henry was a continuation of a problem the Ravens had all season — they just couldn’t mask it anymore, and they went home for the postseason far earlier than anybody who was not on the Titans’ sideline could have expected.

Football Outsiders has a series of defensive line metrics led by Adjusted Line Yards. In 2019, Baltimore allowed 4.1 ALY per carry, ranking 10th in the NFL, but their Power Success was a real problem. FO defines Power Success as the “percentage of runs on third or fourth down, two yards or less to go, that achieved a first down or touchdown. Also includes runs on first-and-goal or second-and-goal from the two-yard line or closer.” The Ravens allowed Power Success conversions on 68% of those situations, ranking 24th in the league. In that playoff loss to the Titans, the Ravens allowed 7 of 13 third-down completions, and three of three red zone/goal line conversions. The loss that ended Baltimore’s season thus played to type for everything that came before.

Fortunately for DeCosta, head coach John Harbaugh, and defensive coordinator Don Martindale, the Jaguars were holding an “EVERYTHING MUST GO!” player sale through the 2020 offseason, and the Ravens took defensive lineman Calais Campbell off their hands for a fifth-round pick. The move saved Jacksonville $15 million in 2020 cap space, and the Ravens gave Campbell a new two-year, $27 million contract extension, with $20 million guaranteed, in March.

Campbell may be 34 years old, but there’s little about his game that indicates any level of attrition. In 2019, he had 71 total pressures, 35 stops, two forced fumbles, and 10 tackles for loss. He did so playing all across the defensive line, and he’s brought all that to Baltimore’s defense, which could not have possibly needed it more than they did.

Remember that Power Success metric? Well, through two games of the 2020 season, the Ravens are one of two defenses (interestingly enough, the Jaguars are the other) who have not allowed a single conversion in any Power Success scenario.

“I think he does what he needs to do to win ball games,” Campbell said of Martindale at the press conference announcing his extension. This last year, he blitzed more than anybody else in football. And I just think being a part of those blitz-happy teams in the past – Todd Bowles is always up there, and I played for him for two years when I was in Arizona – it’s kind of a similar mentality. But the thing I like about ‘Wink’ is that he’s very creative, and he uses people in different positions. And I believe that my versatility, lining up all over the defensive line and being able to blitz and do – I guess you call it like long movements, long rams, whatever you want to call it – but being able to move laterally and then get vertical is a very big strength of mine still at this point and time in my career. So, I’m eager to see how he uses me.

“To my knowledge, he tries to draw up blitzes for certain players to come free, and I’ve always kind of appreciated the mind of a really good defensive coordinator and just why he’ll draw up certain blitzes and what he sees and stuff. So, I’m really eager to pick his brain and learn from him. I don’t know if I’ll ever become a coach. I don’t know if I want to dedicate that much time to it, but it’s still cool to learn from some of the best coaches. And he’s considered one of the best coaches when it comes to creativity and being able to just take advantage of matchups.”

The perfect marriage of player and coach? Not surprising. The Ravens manage to do that a lot, and in Calais Campbell, they might just have added the missing piece that will bring the franchise its third Lombardi Trophy.