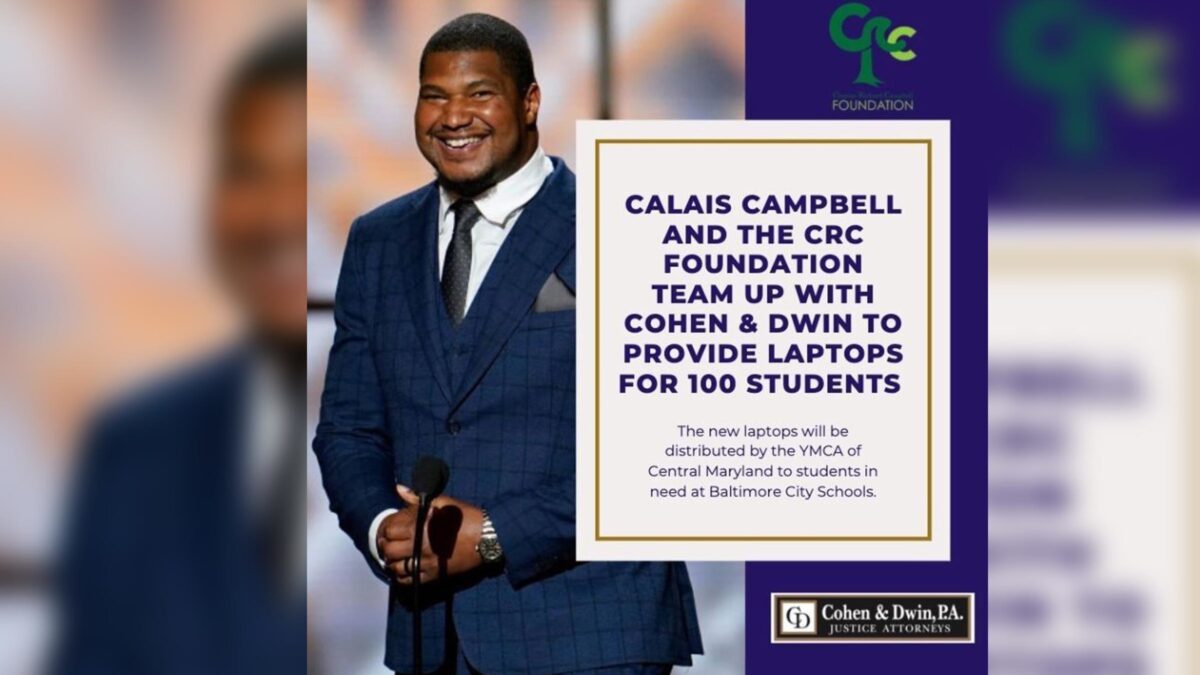 After Calais Campbell was traded to the Ravens, he vowed to make a difference in the Baltimore community. Just a couple months later, Campbell has already begun.

His CRC Foundation has partnered with the law firm Cohen & Dwin to provide new laptops for 100 disadvantaged students. The YMCA of Central Maryland will distribute the computers to help students successfully participate in distance learning during the COVID-19 shutdown.

“Education and technology go hand-in-hand and the gap between our students with opportunity and those without is only growing through distance learning,” Campbell said in press release to announce his donation.

“With the help of Cohen & Dwin, the CRC Foundation is pleased to help provide students from Baltimore City Schools with laptops, another tool to ensure a brighter future for the next generation. To all of the teachers who put in overtime, parents who learned to homeschool and everyone who goes above and beyond to make sure every young scholar has the tools to succeed, thank you.”

A $10,000 donation from the CRC Foundation was matched by Cohen & Dwin, which has served the Baltimore community for almost five decades. The firm has been a major contributor to causes such as Echo Resource Development, the Baltimore County African-American Cultural Festival, the Soul Stroll Walk for Breast Cancer and many more community initiatives.

“We at Cohen & Dwin are very excited to partner up with the newest Raven, Calais Campbell and the CRC Foundation,” said Harold Dwin. “It is a great honor for us to make a financial contribution to this important cause, which endeavors to provide the students of Baltimore high schools with the tools necessary to advance their educations.”

Giving back is a mission for Campbell, the 2019 NFL Walter Payton Man of the Year. The Payton award recognizes a player for excellence both on and off the field, and every team nominates one player each year for the prestigious honor.

During his 12 years as a star defensive lineman with the Arizona Cardinals and Jacksonville Jaguars, Campbell has made the Pro Bowl five times and has become a pillar in both communities. In 2009, he launched the CRC Foundation to enhance the community through the teaching of critical life skills to young people.The foundation was named after Campbell’s father, Charles, who passed away when Calais was 17 years old.

One of eight children in his family, Campbell has experienced financial hardship firsthand. For six months when Campbell was in junior high school, his family lived in the Colorado Coalition homeless shelter. The experience had a profound impact on Campbell, and being traded from Jacksonville to the Ravens in March gives him a new region to touch. He is committed to taking full advantage.

There are a lot of things that I am passionate about, and I really want to try to leave my mark, not only on the team, but in the community as well.”