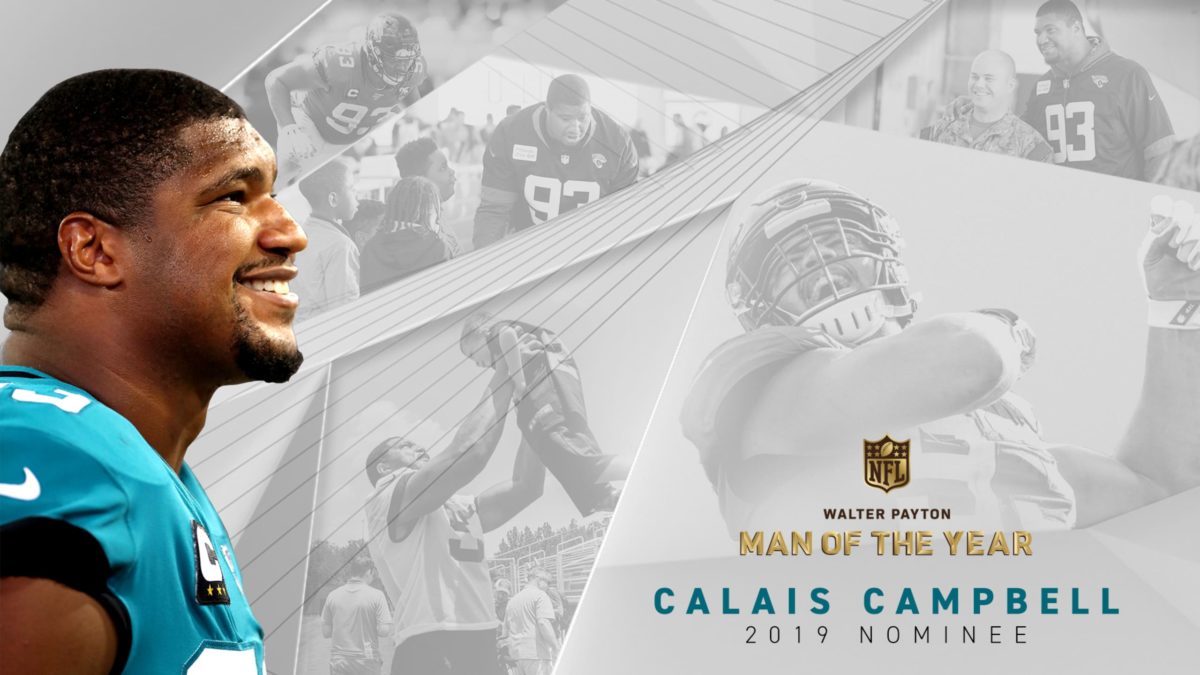 JACKSONVILLE, Fla. – The Jacksonville Jaguars have nominated DL Calais Campbell for the Walter Payton NFL Man of the Year Award presented by Nationwide, the club announced today. Considered one of the league’s most prestigious honors, the award recognizes the NFL player that best demonstrates outstanding community service and excellence on the field. Beginning this week, Campbell will wear a Walter Payton NFL Man of the Year helmet decal through the end of the season in recognition of his accomplishments on and off the field. Click here to access a photo gallery of Campbell’s community service.

“Calais means so much more to the NFL than being a great player on the field each and every Sunday,” said Jaguars Head Coach Doug Marrone. “He embodies all the traits that make someone a consummate professional, and his passion and love for the game and everything it represents is why he’s a perfect candidate for the Walter Payton NFL Man of the Year Award. As a tenured veteran, Calais has made an impact everywhere he’s been during his football career, both inside the organizations he’s played for with his teammates, coaches and the staff, as well as in the community with his neighbors. With every second of free time, it seems like he’s always out in the city looking for a way to give back and make a difference. I’m honored to have had the privilege to coach a player and a man like Calais Campbell.”

Alongside his mother, Nateal, and seven siblings, Campbell formed the CRC Foundation in 2009 and has engaged in numerous charitable initiatives throughout his 12-year NFL career. The CRC Foundation, named for his late father, Charles, is committed to the enhancement of the community through the teaching of critical life skills to young people, transforming them into empowered and self-aware leaders of the future.

Since signing with the Jaguars in 2017, Campbell has embraced the northeast Florida community with enthusiasm. He has hosted two editions of Christmas with Calais, a holiday shopping spree for local kids who have completed extra lessons in financial literacy. In June 2019, he welcomed 250 kids at the Calais Campbell JaxPAL Youth Football and STEM Camp, combining his football acumen and interest in mentoring today’s youth through education. Campbell has made semi-weekly visits to Northwestern Middle School as part of his CRC Book Club, fostering a reading-friendly community at an underperforming school in downtown Jacksonville. In conjunction with the Kids Hope Alliance, Campbell has made multiple appearances around northeast Florida, speaking to students at schools such as Edward Waters College and Raines High School to offer them encouragement and a chance to talk about social justice. He is a regular participant in Jaguars Foundation community events, including base visits during Salute to Service week and Jaguars For a Day programs during training camp.

The 2018 recipient of the NFL’s Bart Starr Award, Campbell sought to elevate his charitable giving and introduced a new initiative for the 2019 NFL season. Campbell’s Season of Giving pledges a specific dollar amount to a different local charity each month during the season based on several on-field metrics. To date, Campbell has contributed $20,000 each to Feeding Northeast Florida (September), the Clara White Mission (October) and the Wounded Warrior Project (November). The United Way of Northeast Florida will be the recipient of his December gift. Prior to the return to his hometown when the Jaguars faced the Broncos on Sept. 29, Campbell donated an additional $5,000 each to several Denver-based charities: the Beckwourth Outdoor Education, Denver Police Athletic League, Hiawatha Davis Rec Center (where he spent time as a kid) and the Rose Andom Center.

On the field, Campbell has displayed impressive productivity and durability during his 12-year professional career. He has played in 183 career games, the second-most among active defensive linemen in the NFL, during his nine years in Arizona and three in Jacksonville. He has posted 88.0 sacks during his career and 11 consecutive seasons with at least 5.0 sacks, the longest active streak in the NFL. Since joining the Jaguars in 2017, he has eight multi-sack games, tied for the fifth-most such games in the league during that span.

“Feeding Northeast Florida and the nearly 260,000 people in our community who don’t know where their next meal will come from, are blessed by the generosity of Calais Campbell and his heart for the those who are less fortunate. It is an honor to partner with someone as caring and compassionate as Calais, who generously uses his voice and resources to help those in need.”

“Calais Campbell has a heart as big as his body. He is a true servant and role model to our kids and the community. The kids absolutely love him because he takes the time to listen. He can relate to the challenges our children in north Florida face and is always there when we need him.”

“Calais has been authentic, impactful and a true pillar for our kids and the overall Jacksonville community. We love this guy!”
For the second year in a row, all 32 team winners will be highlighted as nominees and recognized for their important work during the weekend leading up to Super Bowl LIV. The 2019 Walter Payton NFL Man of the Year will be announced during NFL Honors, a two-hour, prime-time awards special to air nationally on Feb. 1, the eve of Super Bowl LIV, on FOX.

All 32 nominees will receive a donation of up to $50,000 in their name to their charity of choice. The winner of the Walter Payton NFL Man of the Year award will receive a $250,000 donation to the charity of their choice. All donations are courtesy of the NFL Foundation and Nationwide.
In addition, the Walter Payton NFL Man of the Year Charity Challenge will once again further celebrate and encourage fan support of the 32 Man of the Year nominees. Jaguars fans are encouraged to post on Twitter using #WPMOYChallenge followed by Campbell between December 12 and January 12. The nominee who receives the most hashtag mentions during that span will win an additional $25,000 donation form Nationwide to the charity of his choice.